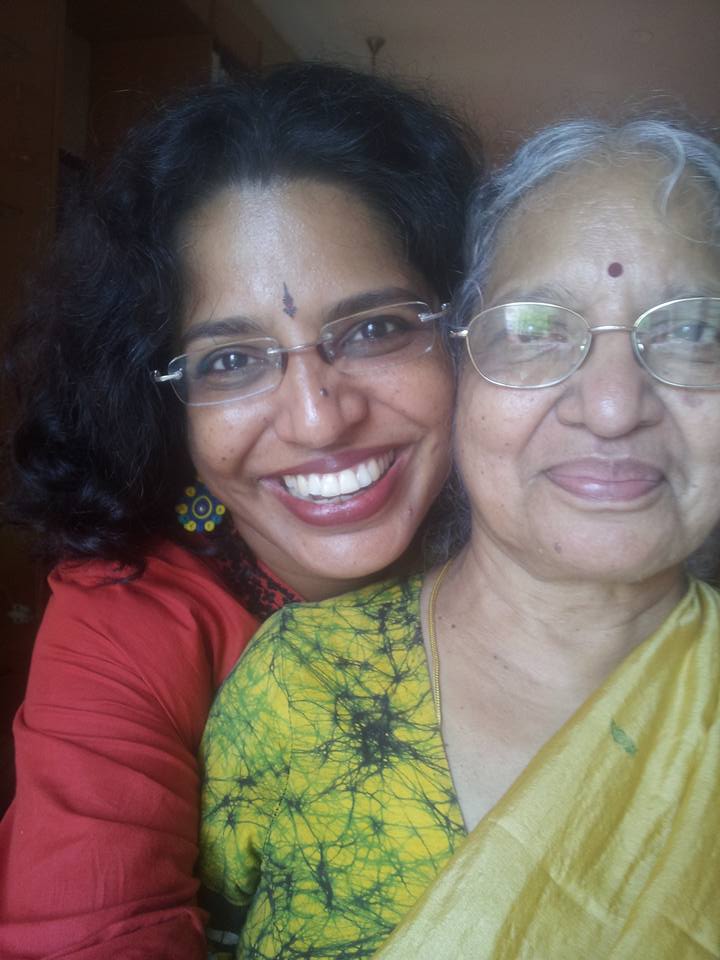 Nagpur. The oranges. Little bursts of sunlight frozen in pulp, waiting for sweet release. The train chugging into the station. Being greeted by vendors selling the finest ‘Santra’ as oranges are called. The freshness of the leathery skin loosely holding the segments together. Collecting the seeds and planning to plant them in the garden at home. The taut knots in the stomach relaxing into a heap. Breathing again.

The huge railway station at Nagpur. The ancient clock, a relic of colonial times, housed in a building gloriously colonial in features. Wide arched doorways. High ceilings. The eager trudge upstairs. The clean, clean waiting room. The familiar service staff. The welcome smile. ‘Kaise hain aap?’ Bacchi kitni lambi ho gayi hai. Aur itni patli. Kuch khaati nahin kyaa, beta?  How are you? How tall has your daughter grown! So thin! Doesn’t she eat anything? Best of all my mother smiling and talking. Gosh! How beautiful she looked when she smiled!

Affectionate ruffling of the hair. Now, how did she manage to keep her hair so smooth and well-groomed? My mother and I had curly hair that refused to be tamed.

How wonderful it felt! The knots in my stomach relaxed and unravelled themselves. I felt lighter. I could breathe easier. Deep refreshing breaths and I didn’t mind the awful smell of the medicinal carbolic soap that was placed in the washroom. It felt so clean, somehow.

There was a huge earthen pot in the corridor, covered with a wet cloth and I loved the taste of water that was sweet and cool. Water at home always tasted salty. I got used to it, but when we tasted water as fresh as this, why I could drink gallons!

For a tip of twenty-five paise, the supervisor in the waiting room would watch our luggage while we traipsed downstairs to the dining hall that was cool and comfortably dark.

The din of people conversing, the slow rotation of ancient fans suspended from the high ceiling, the clatter of cutlery against crockery, would occasionally be interrupted by the announcements of incoming and outgoing trains and the glorious sound of the trains chugging into the station.

Mother always ordered hot, buttered toast with an omelette. She would use her fork and knife and I would imitate her, feeling incredibly sophisticated. The omelette was fluffy and I swallowed huge mouthfuls, biting into crisp toast, melted butter dribbling down my chin, while waiting for Mother to make tea from the tea service that was placed in front of us.

Fascinating. A spot of milk. Fragrant, golden tea poured elegantly from the teapot. Two lumps of sugar for me, one for her. The delicate tinkle of the spoon as it described circles in the cup, dissolving the sugar. A sip. Feeling warm and golden inside. My stomach feeling incredibly light and  not even remembering, any more, what the knots felt like.

Boarding the little train that travelled over the ‘narrow gauge’ over hilly terrain and cut through little hills flanked by thorny shrub and trees, the domain of monkeys that stared at the train, as it trundled by. The carriages rattled away and we were covered by a layer of fine charcoal dust by the time we reached Chhindwara.

My Grandfather stood alone on the platform waiting for us, in the cold, I was shy, at first, unable to talk, but I would gaze at my mother as she suddenly became this young girl, saying Baba that and Baba this…and the guard would whistle, and the train would continue on its way to Nainpur.

My aunts and grandmother would make the most delicious sukha rotis, phulkas and smeared a little ghee, clarified butter on them. The aroma of the ghee was enough to make me feel ravenous.

We would sit down to the evening meal and I wondered how people could actually laugh and talk in a relaxed manner. How could so much joy even be possible! How could my mother be this woman who laughed and spoke so much! How could she even smile?

I never saw her smile at home. She hardly even spoke.

The entire holidays would pass by in a blur of happiness. Happiness that had to be stored away in the mind, like concentrated orange juice, in orangeade or orange squash, to be diluted and had, on a rainy day to bring back memories of the sun, or on a sunny day, to show the sun its place.

The return was fraught with silence and my mother stopped smiling a week before we left Chhindwara. I could feel the muscles in my belly begin to contact again. I tried to make her smile, but she would not.

The knots gathered in full force at Nagpur station. I tried to feed on the sunshine of my juicy oranges, in my big basket of oranges. But even the sweetness of the oranges could not help me feel better.

As for Mother, she had this fixed look in her eyes. The lines about her mouth and the frown on her forehead seemed more pronounced.

I knew I had to wait another year before I could see her smile and hear her laugh. It was such a luxury.

A luxury that we could not afford.

And now I must say that Mother and I live in the lap of luxury!

For we can smile.

Oh, the luxury of it all!

If you knew what knots in the belly feel like,