It was time for Amma’s vacation again. Amma needed to get away from it all. So Amma huffed and puffed her way about the house and Appa saw it coming. Amma’s nostrils flared and her eyes had this fixed unseeing look about them. She stirred at seven in the morning when Appa brought her ‘bed coffee’. Appa trembled as he placed the tumbler on the bedside table. With good reason, of course. For Appa made the worst coffee ever.

He never used fresh coffee powder. The day-old coffee filter stood with its stale coffee grounds waiting to be revived yet again. Arrey, how much can you extract from something that gave up the essence of life a long time ago.  Appa boiled water and poured it with his trembling hands into the filter, spilling some onto the kitchen counter. The decoction that Appa managed to coax from the dying coffee dregs was a watery mess, completely unable to create an identity for itself, as coffee. Ditchwater, maybe. Milk added to it only made it worse…coffee fit for invalids. A heaped spoonful of sugar and Appa carried it to Amma who lay with her back to the door, facing the wall.

I knew Amma’s eyes were wide open, she was staring at bloodstains on the wall, caused by the violent flattening of greedy mosquitoes that feasted on all of us, sucking our blood, till their bellies shone like translucent rubies while they settled on the walls, unable to move for hours. They met a bloody end, but what did it matter, they had feasted well before meeting death. Amma was looking at them now and I wondered if she imagined seeing us all flattened like that as well, for if we disturbed her reverie, she would turn on us with such a look the blood would freeze in our veins.

So Amma stared at the wall, unmoving, unresponsive even to Appa whom she barely tolerated. Appa saw the signs even before we did and stopped nagging Amma about anything at least two days before Amma entered her ‘state’.

He resisted temptation even when Amma soaked enough rice and pulses for dosas, savoury pancakes that could form infinite circles on the heated griddle, for breakfast, lunch, dinner and breakfast the next day… The coconut chutney and the potato curry would be made and stored in huge containers, gradually undergoing irreversible changes. The coconut would separate from the rest of the condiments in the chutney, solid against a watery mess. The mint would turn itself from a fresh green colour to an unappetizing brown mess and give out a sour smell, indicating the ripe activity of bacteria. We would refuse to eat the curry and chutney by evening and the maid would throw it away as well. Amma would scoff and say that maids were so very impertinent and proceed to serve us dosas with sugar. Either you loved this innovative touch or hated it. And we hated it. So Appa would go to the little ‘Darshini’, the eatery around the corner, and have ‘Bisi Bele Bath’ and ‘Curd Rice’, both staple rice dishes, to keep ‘Atma Rama‘, his soul, satisfied, and I would look for pickles and chutney powder to help the dosas go down easily. We did not dare to make anything else, for it would be sacrilege to mess with Amma’s menu. Amma cackled as she recounted how Manjunath, the boy who had the ‘wet’ grinder appreciated her dosa batter and stole at least half a liter of it.

Appa mumbled, ‘Dosey Sammaaradhane’ – a ritualistic adoration of dosas, a ceremony that literally went on for twenty-four hours and even more… and that drove Amma over the edge. Appa saw the mad gleam in her eyes and backed away. ‘No, no…’ It was too late. Amma had had enough.

The coffee that Appa had proffered to Amma grew cold by her bedside. Amma refused to get up till eleven o’clock. After that she got up and walked unsteadily to the dining table that nobody ever used for dining. It was a space where books, old newspapers, mosquito ‘mats’, unused cassette tapes, unwashed laundry, fresh laundry, dirty dishes and clothes pegs vied for space. She sat on a chair behind the table and traced patterns in the dust that had collected in a fine film on the table. She sat there for an hour and then, at noon, condescended to brush her teeth and sat there waiting for her coffee. She swung her feet rather insolently as she perched herself on a chair evidently too high for her. She sipped at the coffee I gave her and refused breakfast. Dosa, what else?

The maid avoided Amma as she glared at her, piercing malevolent darts, into her back, as she swept the dust and spread it evenly across the room. Appa had gone out and would not return till late evening. Amma retired to her bed and declared somebody was ‘pushing’ her from behind and she felt giddy. We knew what would follow. ‘Bee Pee… Nannage BEE PEE jaasti aaythu…’ You see Amma had hypertension. High blood pressure. High BP. And Amma took complete advantage of her ‘condition’. The friendly neighbourhood doctor advised Amma to take rest and Amma concurred. She lay in bed for at least a week. The neighbours would drop in to check on her and her reception of guests would differ from person to person and from time to time. Appa would tiptoe his way through the house, from room to room, a shadow of himself. I would end up cooking bland, salt-free food till Amma emerged from her ‘invalid’ state.

Appa would apologize to the women who looked hurt that Amma had not received them. I would get them coffee, while Appa made excuses for her condition. ‘You see, Missus is going through Menopause,’ Appa would say blithely, and the ladies would hastily gulp their coffee, hiding their embarrassment. Well, in that case Amma had been menopausal for twenty years now. I would glare at Appa from the kitchen but he would go on, oblivious to the ladies’ discomfort.In fact he took great pride in announcing ‘160/120…and she does not take any medicine…’ I would swoop in and change the subject but Appa always found a way to bring the topic back to Amma and he would say, ‘Please don’t mistake her…her heart is good…she is a good woman…her health is weak though…she is fragile…’

Believe me there was nothing remotely weak and fragile about Amma.

But Appa would know, wouldn’t he?

And Amma would emerge from her self-induced vacation and go about her day as if nothing had happened.

Take a look at her photographs.

She didn’t have Bee Pee when the first one was taken. 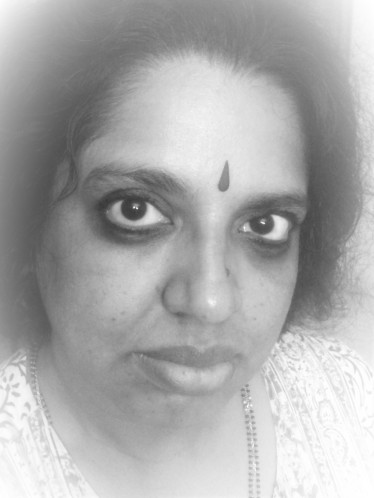 And the other one speaks for itself, doesn’t it?

I hope this meeting with Amma is memorable. Because, with Amma, one never knows…